McGuire joins other AAUW members to lobby Congress for ESEA, 2015 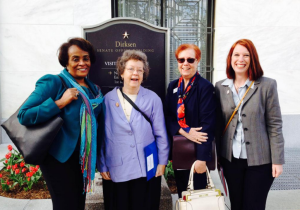 We flew up on Wednesday and met as a group in the late afternoon to discuss the issues with the reauthorization of the Elementary and Secondary Education Act. This is the 50thanniversary of the Act—it was originally signed by President Johnson. It was reauthorized under President Bush in 2002 as “No Child Left Behind”, and is now in the Senate as “Every Child Achieves Act”.

AAUW was part of a large coalition formed by the Leadership Conference. It included parents, educators and leaders of civil rights groups. AAUW had four representatives there—Maine, Mississippi, Ohio and NC. The other states at the meeting included Illinois, West Virginia, Georgia, Indiana and Tennessee.

I was joined by three women from the Charlotte-Mecklenburg schools—two principals and one assistant principal. They each lead schools with a majority of high risk children. I was so impressed with the principals—they were young, informed, articulate and caring.

On Thursday we again met as a group and reviewed the materials and agendas for the day. The Leadership Conference had arranged for each state group to meet with a least one of their senators and in some cases with both. Thursday was also the day of the final confirmation vote for Loretta Lynch so the Hill was extremely busy. Senator Patty Murray of Washington welcomed us to the Senate and thanked everyone for coming. We then headed off for our meetings. The four of us from NC met with Senator Tillis’ Education Advisor Joseph Nolan and then with Senator Burr’s Deputy Legislative Director Christopher Topping. North Carolina receives more than $500 Million in federal funding under this law so its continuation is very important to the state. Both  the Senate staffers were very familiar with the bill and of its importance. While we did not get a firm commitment for a vote, we were heard.