Museum of Coastal Carolina – a place for families to learn 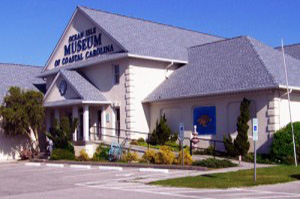 The Museum of Coastal Carolina is a natural history museum located at Ocean Isle Beach in Brunswick County, North Carolina. Animal exhibits include an aquarium and a touch tank with live sea animals, shells, fossils, insects, a display about sharks, live snakes, bird dioramas and an ocean reef diorama that includes life-sized models of whales, sharks, sea turtles and rays.[2] Other exhibits include river basins, the effects of storm water runoff and beach litter on the water’s ecology, barrier islands and tides. The museum also includes displays of local and maritime history, including shipbuilding and area Native Americans.

The museum offers afternoon and evening programs and special lectures, including area efforts to protect sea turtles.  Stuart Ingram’s vision of sharing his knowledge of nature and science was prefaced by this question while fishing on the beach. He had the idea to create a museum for the coast. The Museum of Coastal Carolina opened on May 25, 1991 in Ocean Isle Beach, NC. 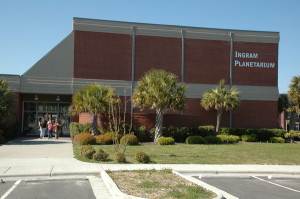 Now, imagine a young World War II airman learning to navigate his aircraft by looking at the stars. Years later, he points out different constellations to his family and friends on warm summer nights. Fascination with the night sky lead Stuart Ingram to dream of a planetarium where others can share his knowledge of and fascination with the stars. Ingram Planetarium opened in May, 2002 in Sunset Beach, NC — only four miles away from the Museum of Coastal Carolina which he had opened 11 years earlier.

With the first donation from his mother-in-law, the encouragement of a steering committee, the generosity of numerous friends, and the support of his wife, Louise, the local business community, and the citizens of Brunswick County, Stuart Ingram’s visions of the Museum of Coastal Carolina and Ingram Planetarium are a reality today.