Sisters of Mine; Hear the Voices

AAUW of North Carolina is thrilled to partner with the Shared Radiance Performing Arts Company to present a video trailer for Sisters of Mine; Hear the Voices. Although the performance along with our Annual Conference had to be cancelled in March, these ladies have worked to record a short video trailer for our enjoyment during this time of separation.

Sisters of Mine; Hear the Voices is a new production commemorating the 100th anniversary of the 19th Amendment. As you watch the actors and listen to the original music, you will travel back in time to the 1920s and before, when women were struggling for autonomy and the right to vote. 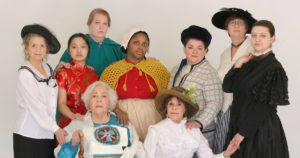 AAUW Greensboro branch member and Shared Radiance Artistic Director, Sherri Raeford, worked with these eight other actors to research a diverse group of women, mostly from North Carolina, and to create moving monologues for their stories.

This is a story for all of us — the play demonstrates the injustice that the 19th Amendment did not enfranchise women of color and other minorities in 1920.  You can’t help but be moved as you relive women’s struggles for equal rights with the actors – right up to today’s fight for passage of the ERA!

A grant from AAUW NC supported the creation and production of this play. We are still hoping that additional opportunities to stage the play will be open to the cast in the future.