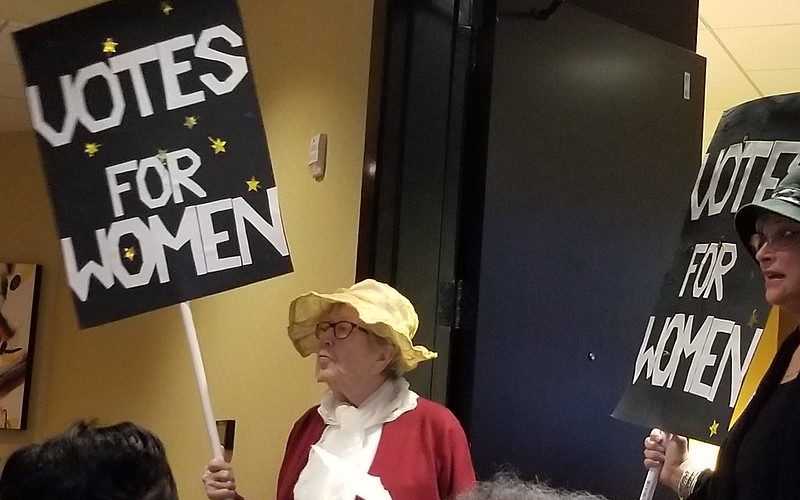 “Suffragettes” at the 2019 Conference

On Friday evening after dinner we had 3 women (Sue Metz, Mary Peterson, and Wendy Haner) put on their suffragette outfits and perform a Watchfire play. Sue wrote this and she was the narrator of the words of the suffragettes. Mary and Wendy acted out the importance of women getting the right to vote. The audience participated along with having an opportunity to voice their thoughts as to the importance of the Watchfire demonstrations.

Here’s Wendy’s summary of the action:

It all begun on New Year’s Day, 1919, a fire was lit in an urn in front of the White House and all the women began throwing copies of speeches in to feed it. The date was in honor of Joan of Arc: “the history of Joan of Arc is the history of women and government throughout the ages of the world”.

We were standing with our banners on and one of them read “Vote For Women” We didn’t have a voice or a vote at all in the national government. Our views included…

The Watchfires continue to spur our contempt for President Wilson who was deceiving the women’s world when he appears as the prophet of democracy. President Wilson has opposed those who demand democracy for this country. He is responsible for the disfranchisement of millions of Americans. We in America know this. The world will find him out.”

We sang our songs and listened to men state the following:

We continued to burn the fire in the urn and protest until finally, on August 26, 1920, the 19th Amendment to the Constitution was ratified. And on November 2nd of that year, more than 8 million women across the United States voted in elections for the first time.